ACT Tax Facts: By Standing Still on Taxes, the U.S. Has Fallen Behind the Rest of the World

We all have seen the chart where we used to have the lowest corporate tax rate in the world and now we have the highest. By standing still we have fallen behind. And everybody says, quite rightly, why the heck are we in that position?‚ Martin A. Sullivan, Tax Analysts, Speaking on January 29, 2014 at the American Enterprise Institute

Congress last reformed the U.S. tax code in 1986. The world has changed dramatically since then, and other countries are modernizing their tax systems as a result. As these nations adapt to attract business investments and encourage economic growth, the U.S. is losing out. With our high corporate income tax rate that is out of step with the rest of the world and a dysfunctional system of international corporate taxation, our economic growth is hindered. American workers and their employers are stuck at a significant disadvantage relative to global competitors.

In 1988, as a result of the bipartisan Tax Reform Act of 1986, the top U.S. federal corporate income tax rate was cut to 34 percent federal plus 4.6 percent average state rate. This total state and federal income tax rate of 38.6 percent was well below the average 44.3 percent rate for other OECD countries. Since then, the average for other OECD countries has fallen 19.5 percentage points to 24.8 percent, leaving the U.S. with the highest corporate tax rate of the 34 OECD member countries. 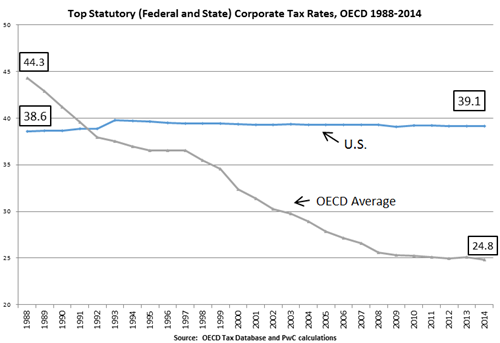 How did the U.S. fall so far behind? A look at the U.K., Canada and Japan shows:

There's no question that the competitiveness of the United States as a location for investment and corporate headquarters is being diminished by the more competitive corporate tax systems abroad. Mieko Nakabayashi, Member of the Japanese House of Representatives, noted that With most of the world Japan included cutting corporate tax rates and employing territorial tax systems to remain competitive, the U.S. must surely know that its hesitancy to do these things is handing the advantage to its international competitors. They will suffer from that hesitancy while we and others outside the U.S. will benefit.

British Finance Minister George Osborne highlighted the competitiveness rationale for lowering the U.K. corporate tax rate, saying. For we live in a world where the competition for business is growing ever more intense. I want a sign to go up, over the British economy, that says Open for Business. And this is how I propose to do it. Corporation tax rates are compared around the world, and low rates act as adverts for the countries that introduce them.

The United States has also fallen behind by holding fast to a worldwide system of international taxation long after other modern industrialized economies have moved on. According to a 2013 report, 28 of 34 OECD member companies and all G7 countries except the United States have adopted a more modern territorial system, with half of these countries adopting territorial tax systems within the last 15 years. According to a report by Business Roundtable, 93% of the non-U.S. based OECD companies in the global Fortune 500 reside in countries with territorial tax systems, putting U.S. multinationals at a distinct competitive disadvantage.

Once again, other countries have recognized this trend and moved to keep their economies competitive.

According to a recent report from the Berkeley Research Group, transitioning to a territorial system could lead to $1 trillion in repatriated funds in the short term, creating a one-time increase in U.S. GDP of $208 billion and creating 1.46 million American jobs. In the long run, a territorial system would lead to an increase in U.S. GDP of $22 billion per year and create at least 154,000 new U.S. jobs per year.

Even as Japan, the U.K., New Zealand, Finland, Canada and other countries have modernized and improved their tax codes, the U.S. has stood still. The U.S. is currently stuck with a tax code so burdensome that U.S. companies involved in cross-border mergers with smaller foreign partners frequently are choosing to move their tax home out of the United States. Make no mistake: the environment that exists today is a symptom of how anticompetitive our tax code has become in its old age.

There is an ongoing global competition for leading businesses and economic growth. Until we tackle tax reform, the United States is playing at a significant disadvantage.

It's time for the U.S. to apply the lessons we and countries across the globe have learned since 1986 and reform the tax code to reinvigorate our economy.