U.S. had the second highest corporate tax rate in the world in 2015

Among its peer group of 34 advanced economies that are members of the Organization for Economic Cooperation and Development (OECD), it is frequently mentioned that the U.S. combined federal and state statutory corporate tax rate of 39 percent is the highest over 14 percentage points above the average for the other 33 countries in 2015 (see the OECD tax database for details).¬† Less well known is that the U.S. missed out on having the highest corporate tax rate in the world by just one percentage point!¬† We have Guyana to thank for shielding the U.S. from that dubious honor.

Guyana's GDP ranks 163rd out of the 194 jurisdictions for which the World Bank provides information in 2014 hardly a competitor.¬† Countries with lower corporate tax rates than the U.S. represent 99.995 percent of non-U.S. world GDP.

For those who argue statutory rates are irrelevant due to tax incentives and loopholes, a new study conducted for the European Union shows that in 2015, the U.S. had the second highest effective tax rate among the 35 countries included in the study (the 28 EU member states, 4 other European countries, Canada, Japan and, the United States).[1] ¬†The U.S. corporate effective tax rate of 36.5 percent was more than 15 percentage points higher than the average for the 28 EU countries.[2]

With tax reform, the United States can shed its out-of-date tax code and provide a competitive corporate tax system to better allow American companies and American workers to compete in the world economy.

For the last two years, the Tax Foundation has found that the U.S. rate of 39 percent is the third highest statutory corporate tax rate, after Chad and the United Arab Emirates (UAE) (Guyana is not referenced in the Tax Foundation analysis).

But Chad undertook corporate rate reduction in 2015 and lowered its corporate rate from 40 percent to 35 percent (see PwC's Worldwide Tax Summaries for Chad).¬† In addition, according to PwC[3], the UAE corporate income tax "is currently only enforced in respect of corporate entities engaged in the production of oil and gas or extraction of other natural resources in the United Arab Emirates."

Ongoing Tax Rate Reductions in Other Countries Leave the U.S. Lagging Farther Behind

In an effort to remain competitive, countries across the world continue lowering their corporate tax rates, while the U.S. remains at a standstill. Recent rate reductions include: 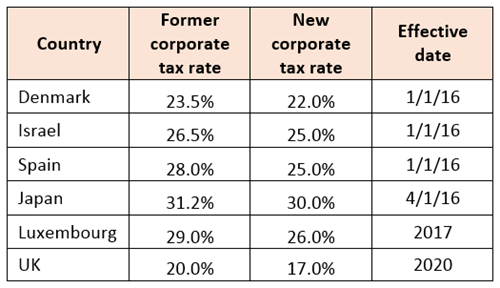 It's time for the U.S. to enact tax reform that brings the U.S. corporate tax rate in line with the rest of the world and level the playing field for American businesses and their workers.

[2] The effective tax rate computation in the EU study assumes that all income of U.S. companies qualifies for 9-percent domestic manufacturing deduction.¬† If the EU study had alternatively assumed that only 30 percent of corporate income qualifies for the deduction (based on recent IRS data), then the study likely would have shown the U.S. to have the highest effective tax rate.

[5] A company is defined as a commercial company if it derives at least 75 percent of its gross income from goods not manufactured by it or if it is engaged in telecommunications, banking, or short-term insurance.